In the late 1980s, Vietnam experienced a large malaria resurgence resulting from the spread of chloroquine resistance and a strained public health system suffering from slow economic growth during the post-war rebuilding effort.   In 1991 and 1992 there were more than a million clinical malaria cases per year in Vietnam, with 4503 deaths in 1991 and 2669 deaths in 1992.

In the 1990s, the artemisinin drugs began their first formal efficacy tests in human trials in southern Vietnam, with encouraging results that you can see here, here, and here.   These clinical trials were prompted by the artemisinin research done in China in the 1970s and 1980s, some of which you can read about here and here.   Artemisinin derivatives began to be used in public health settings as early as 1991, and by the late 1990s Vietnam had reduced malaria incidence by two thirds.   By 2014, nationally reported malaria cases had fallen to between 15,000 and 28,000, and the number of deaths had fallen to nine.

Data on malaria incidence are gathered by the National Institute for Malariology, Parasitology, and Entomology (NIMPE), and the regional IMPE offices.   In the summer of 2011, Dr Phung Duc Thuan from the Ho Chi Minh City IMPE began helping us assemble these data for southern Vietnam from 1991 to 2010.   These data were analyzed by Amadea Britton and Corey Peak (both students at the Harvard School of Public Health, working with Caroline Buckee) and the major association that could be seen in the time series was between artemisinin adoption and yearly incidence. 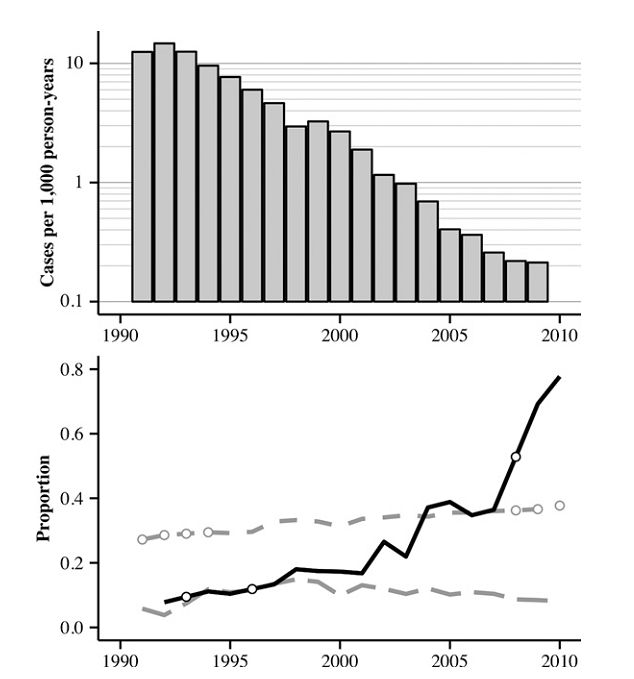 Figure 2 from Peak et al (2015, AJTMH) is reproduced above.   In the bottom panel, the black line shows the fraction of all treatments ordered — treatments are ordered by provincial malaria control programs from the central government in Hanoi — that contained an artemisinin derivative.   Various artemisinin courses and combinations were used in the 1990s, and by the 2000s dihydroartemisinin-piperaquine was recommended for most malaria cases.   The two dashed lines show the fraction of the population that lives in urban areas (top) and the fraction of the population that is protected by bed-net coverage or indoor residual spraying (bottom) as defined by IMPE.

If you read through to the last table in the paper, you will also see that in the regression analysis the discretionary budget variable came out as marginally significant, suggesting that an increase health system capacity was also associated reduced malaria incidence — not an unexpected outcome.