Data
Data were collected from CovidTracking.com and from state department of Public Health websites. Discrepancies were resolved by looking at state-specific data and discussing data reporting patterns and irregularities with state officials, physicians, or laboratory staff.

Mathematical Transmission Model
An ordinary differential equations (ODE) compartmental epidemiological model was constructed to mimic the flow of individuals through various stages of infection and hospitalization. The model is age-structured with nine age classes in ten-year age bands, starting with 0-9, 10-19, and with 80+ as the highest age class. Twenty-seven host states, described below, are included in the model. Model code is publicly available. A class diagram of v5 of the model is shown below. 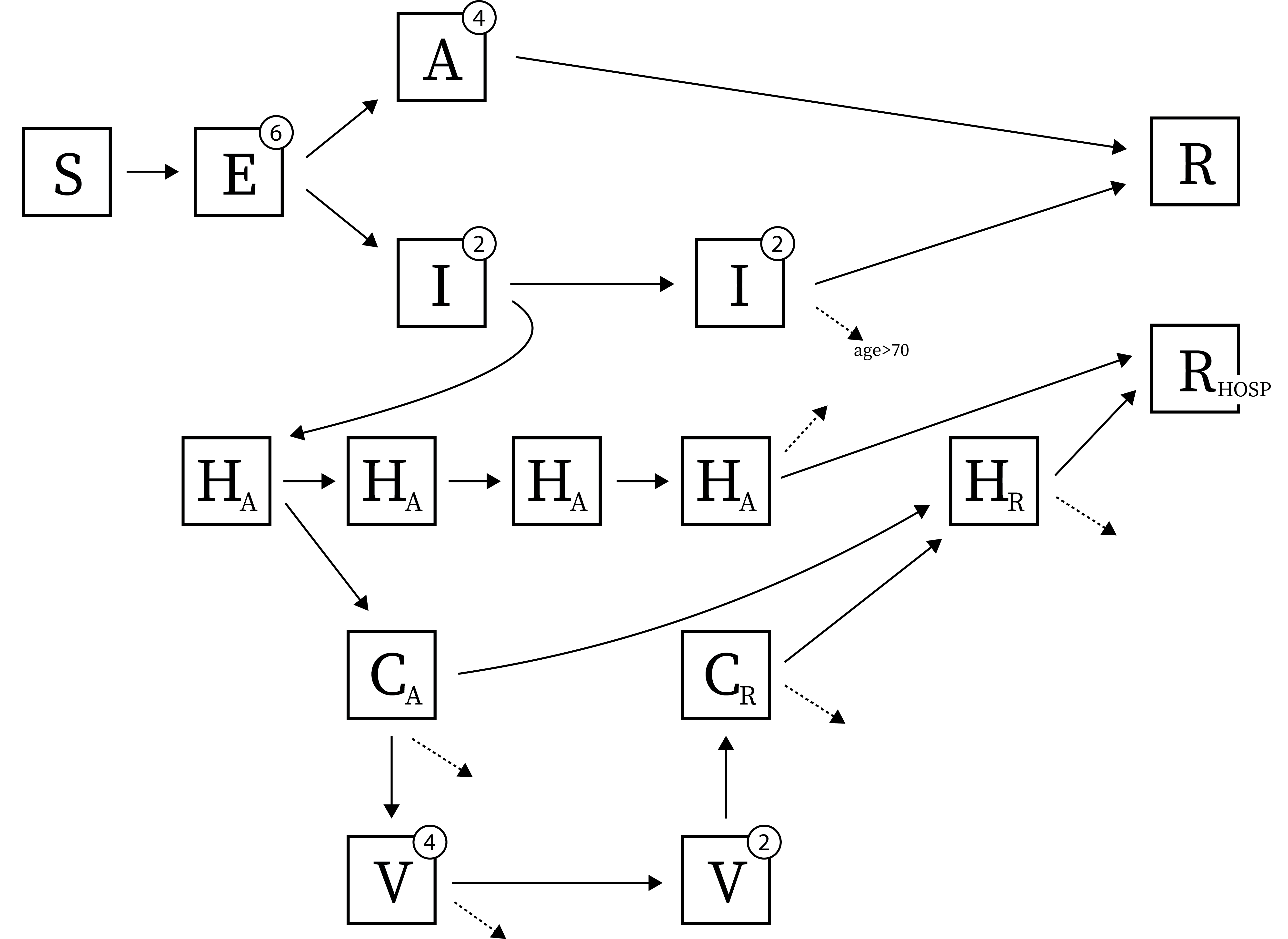 Susceptible (S) individuals
Individuals who are healthy, have never been previously infected with SARS-CoV-2, and have no antibodies to SARS-CoV-2.

Exposed (E) individuals
Individuals who have recently been exposed and infected with the virus. There are six stages of exposed individuals, E1 to E6. The duration of this exposed period or incubation period follows an Erlang distribution with coefficient of variation equal to 0.41. These individuals do not show symptoms. Individuals in stages E5 and E6 of the incubation period may be infectious.

Asymptomatic (A) individuals
Individuals who are past the incubation period and either (1) do not show any symptoms, or (2) have mild enough symptoms which under normal circumstances would not result in them reporting to a hospital or clinic. These individuals probably have a moderate to low viral loads in their lungs and URT. They are infected and may be shedding virus at low rates. As in other publications, these individuals’ transmissibility has been assumed to be half of the infectivity of an infected and symptomatic individual. There are four stages of asymptomatic infection, A1 to A4. The coefficient of variation of the asymptomatic period is 0.5.

Infected (I) individuals
These individuals are symptomatic and infected. Moving from E6 to I1 means that the individual developed symptoms. Infected individuals are not hospitalized. Their symptoms may be moderate or somewhat severe, but not severe enough to be admitted to a hospital. There may be individuals in the I-class who have dyspnea but no hypoxia and no other underlying conditions. Current (April 4) indication for patients with (1) dyspnea, (2) no hypoxia, (3) no additional underlying complications is to be treated as an outpatient.

Hospitalized (HA) individuals, acute-stage
These individuals are hospitalized on the medical floor level of care (not ICU). The acute-stage designation means that these patients recently arrived at the hospital and may be at risk for progressing to more sever symptoms and ICU admission. These individuals will likely have a nasal cannula attached, but will not have high-flow oxygen as a high-flow oxygen patients need to be isolated. These patients may or may not have hypoxia, and they may or may not have dyspnea. For the average non-lung-diseased patient, one would experience dyspnea first and hypoxia second.

Critical Care (C) Patients, i.e. in the ICU, but not on a ventilator
This will include two types of patients (1) patients that need high-flow oxygen, and (2) patients that progressed to critical condition for other reasons. Individuals in the high-flow oxygen group may cause virus to aerosolize from within the nose and may be infectious to health care workers.

Critical Care (CR) individuals, recovering stage
Patients in ICU, after they have come off a mechanical ventilator.

Hospitalized (HR) individuals, recovering stage
Patients in medical floor level of care, after they have been discharged from the ICU.

Recovered (R) individuals, recovering stage
Patients who survived infection, have no viral load, cannot transmit to anyone else, and are fully immune.

Recovered (RHOSP) individuals who have been discharged from a hospital (v5 only)
Patients who survived infection after hospitalization, have no viral load, cannot transmit to anyone else, and are fully immune.