Using Rhode Island age-structured case data, age-structured hospitalization data, as well as ICU and ventilator occupancy data points collected by the Rhode Island Department of Health since March 1 2020, we are able to infer changes in population-mixing patterns over the past two months. We are also able estimate the fraction of symptomatic cases that are observed by the health system, the hospital length-of-stay for non-ICU cases, and the probabilities of progressing to hospitalization or ICU care. By late March, physical contact and social mixing had dropped to 60% of their early March levels; by mid-April mixing was lower than 40% of previous levels. More than half of symptomatic COVID cases in Rhode Island are reported to the health system (posterior median estimate is 71%). Our scenario generation indicates that strong social distancing and physical distancing measures need to be in place for all of May.

Like in many other states, Rhode Island’s Department of Health has been diligently collecting a rich data set that currently spans about 10 weeks of epidemic transmissin of SARS-CoV-2 (COVID). On April 27, our first preliminary analysis indicated that population mixing rates had fallen in Rhode Island by 80% but if recent transmission trends continued the epidemic would re-enter an exponential growth phase (this did not occur). At the time, we assumed that 25% of cases in Rhode Island were reporting to the health system and being confirmed as COVID cases; this was based on a published analysis [version dated 24-04-2020; not peer-reviewed] that suggested that under-reporting in the US was at about a factor of eight (ρ=0.125). We used ρ=0.25 for Rhode Island since the epidemic response seemed to get an earlier start and was better supported than in other states. This approximation for ρ was still too low (see below), and this is one of the reasons that our April 27 forecasts for near-term epidemic trends were overly pessimistic.

Important details are listed on our Methods Page and in the previous post.

Data for this analysis include case numbers through April 29. We also use data on hospitalization incidence, current hospitalization numbers, current ICU occupancy, and the number of ICU patients currently on ventilators.

Daily β-values (population mixing parameters) were modeled using cubic-spline basis functions as before. A negative binomial observation function with a reporting rate ρ was used to model the observation probability of daily case counts, using the mean incidence predicted by the ODE model.

Posterior distributions for daily β-parameters were rescaled by the mean β-value between March 1 and March 10, representing the first ten days of the known epidemic in Rhode Island, but before any social distancting recommendations/requirements were put into place. Figure 1 shows the posterior distribution of all 60 relative mixing parameters from March 1 to April 29. By late March, population-level mixing and contact patterns had dropped by about 40% when comparing to their early March levels. By mid-April, this reduction was more than 60%. An LSTMH analysis shows a 50% contact level reduction in Rhode Island from March 9 to late April; our estimate for this time period is around 67%.

Note the larger amount of uncertainty in the β-parameters when compared to our April 27 preliminary analysis. The reason for this is that inclusion of the hospitalization, ICU, and ventilator data does not allow the case reporting data to completely determine the β-values. 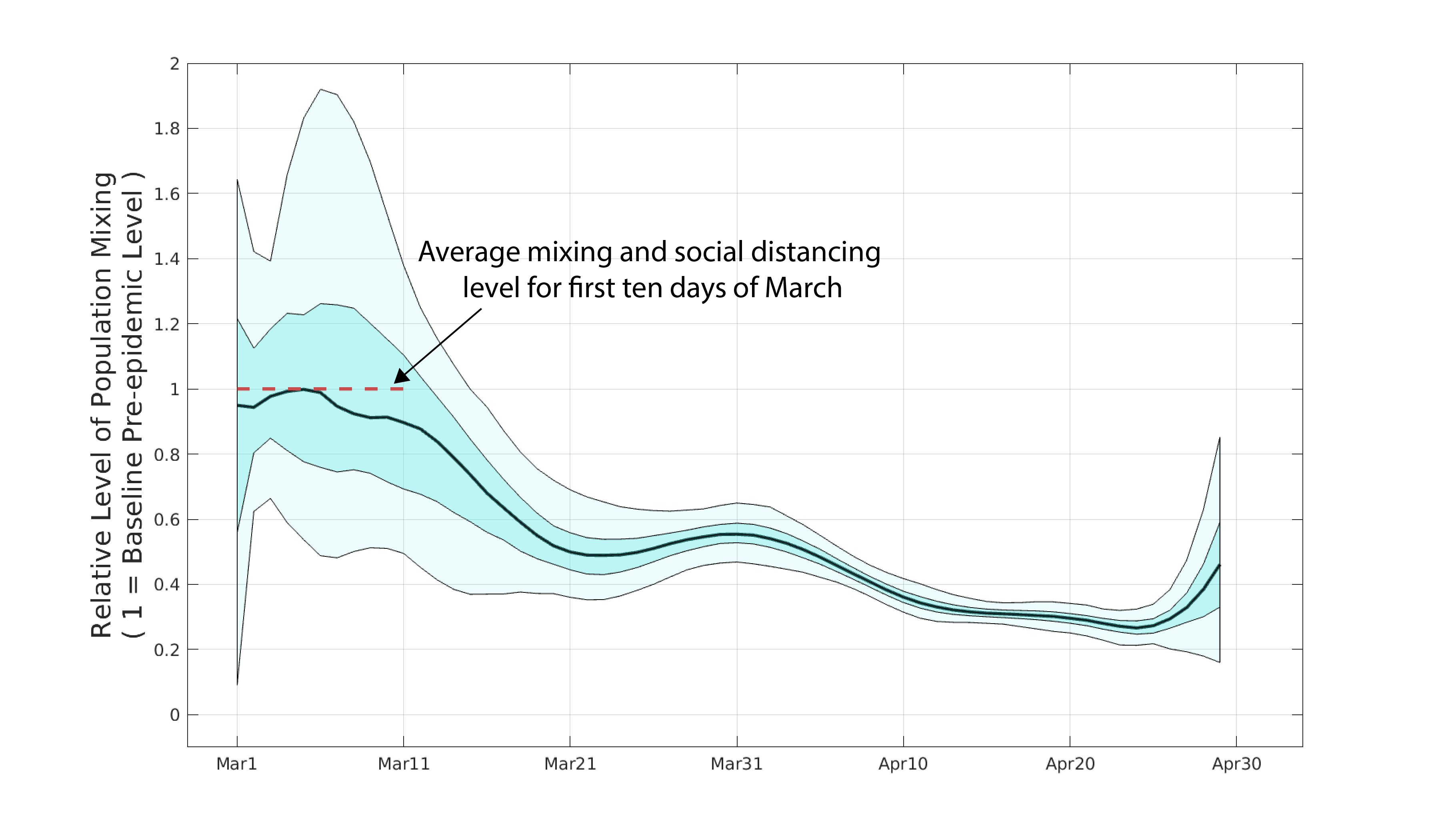 Using the delay from case presentation to hospitalization, we were able to estimate the reporting rate ρ in our observation function. The fraction of all symptomatic cases that are seen and counted by the health system is ρ=0.71 (posterior median) with an uncertainty range expressed as 95% highest posterior density (HPD) from 0.46 to 1.0. This means that more than 45% of of all symptomatic cases in Rhode Island are reported to the health system.

Figure 2. Posterior distributions for the reporting rate ρ (left) and the duration of hospital stay (right) for non-ICU patients. Gray bar graph in the background shows a histogram of 1000 samples from the posterior, and the filled green area is a kernel-smoothed density function. Medians, credible intervals, and HPD intervals are shown above each plot. 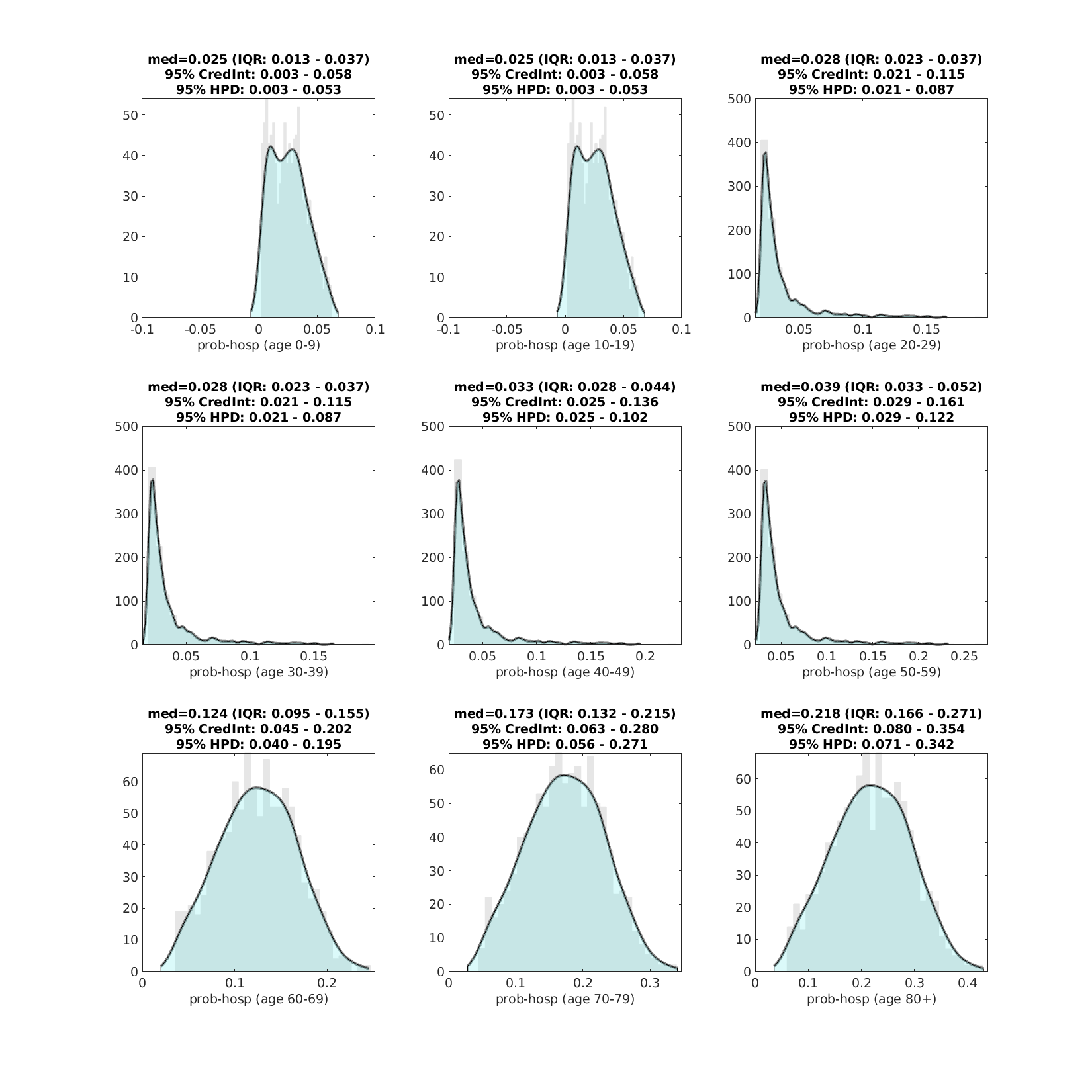 Figure 3. Posterior distributions for age-specific probability of hospitalization (pH). Gray bar graph in the background shows a histogram of 1000 samples from the posterior, and the filled green area is a kernel-smoothed density function. Medians, credible intervals, and HPD intervals are shown above each plot.

Figure 4. Posterior distributions for age-specific probability of ICU admission for a patient that is already hospitalized. Gray bar graph in the background shows a histogram of 1000 samples from the posterior, and the filled green area is a kernel-smoothed density function. Medians, credible intervals, and HPD intervals are shown above each plot. We only show this estimation for the >60 age classes, as the distribution is identical (with slightly lower values) for the younger age classes.

When social mixing stays <30% of original levels (i.e. at the mid-April level), the epidemic appears to be controllable. Median case numbers decline from their April 23 peak of 437 new cases and decline to about 200 cases per day by the second half of May, which is in agreement with current trends in the data.

When social mixing is relaxed to 30%-70% of normal levels (i.e. at late-March levels), the epidemic rebounds and case numbers increase. Because the vast majority of the population in Rhode Island is still susceptible, an R-value larger than one results in a sustained increase in case numbers through most of May. Judging by the shape of these curves the virus’s effective reproductive number (R-value) is not “just barely above one”, but high enough to cause a nearly full-sized epidemic to occur during this rebound. This is the scenario that would have occured if a May 1 re-opening had caused mixing rates to about double from mid/late-April levels. Note that our model assumes equal mixing (mean field) for the entire population. We would forecast smaller case numbers if we accounted for geographic structure and variation in susceptibility in the population.

If social distancing restrictions are removed (mixing at >70% of normal levels), the epidemic proceeds on its unmitigated course infecting >80% of the population, causing thousands of hospitalizations, and over one thousand deaths. 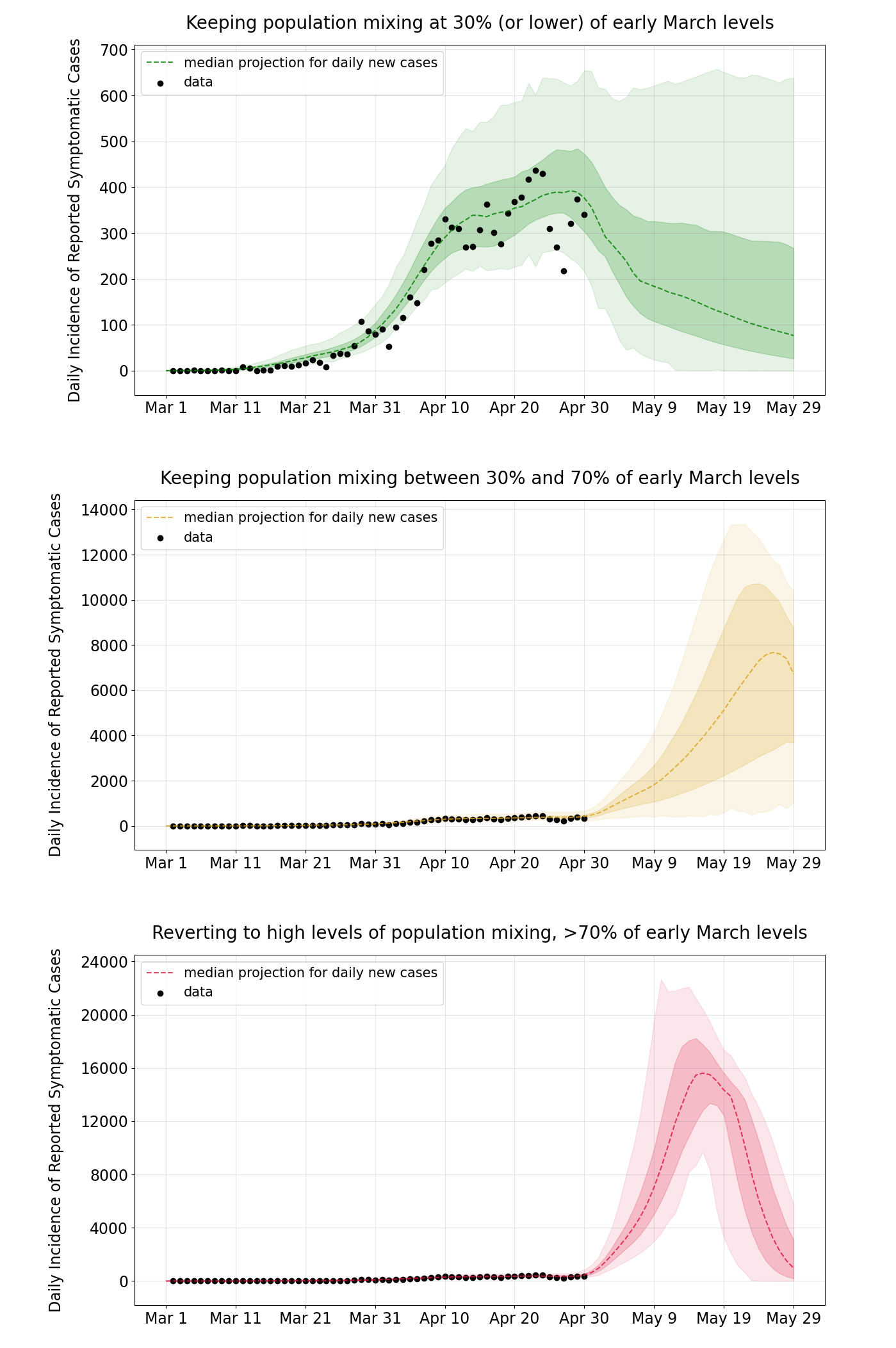 This would imply that the underreporting factor in Rhode Island is somewhere between 2.8 and 5.6, which is on the lower end of those observed in other localities both within and outside the US.

In order to perform a more complete statistical analysis on the age-specific probabilities of hospitalization and ICU admission, more detailed age-structured data will be needed. We will attempt age-specific inference for all age-classes in a subsequent analysis.

The mathematical transmission model assumes that all individuals in Rhode Island have an equal chance of getting infected by any other Rhode Islander. This is called a mean field model and is an oversimplification of the true network structure of the population. Individuals also have different levels of exposure by age, city, neighborhood, occupation, socio-economic status, and many other factors. Geographic structure and variation in susceptibility have the effect of reducing rate of spread in the population; based on this, the forecast case numbers in Figure 5 are likely to be overestimates.

The current symptomatic case fatality rate (sCFR) in Rhode Island appears to be a minimum of 2.6% (as this does not account for the needed correction for the delay from case presentation to death). With an underreporting factor between 2.8 and 5.6, this would imply an infection fatality ratio (IFR) between 0.47% and 0.93%, which is within the expected IFR range measured in other states and countries.

May 23 2020 — this analysis contains a scaling error in the β-estimation in Figure 1. Although, the general estimated reduction in social mixing levels is qualitatively correct, the sizes of the mixing reductions are under-estimated here. Our updated analysis. contains the correctly scaled β-estimates.