In Vietnam, the first patient infected with the 2009 H1N1 pandemic influenza virus landed in Ho Chi Minh City airport on May 26, 2009. One month before this introduction, the Oxford University Clinical Research Unit and the Hospital for Tropical Diseases had begun testing patients with fever arriving at Ho Chi Minh City’s international airport, and tracking passenger numbers and country origins to assess the numbers and/or likelihoods of introductions of 2009 pandemic influenza into Vietnam.

About 760,000 international airline passengers arrived in Ho Chi Minh City between April 27 and July 24, approximately 57% of which were arriving from countries where the 2009 H1N1 pandemic virus had already begun spreading. At least 967 passengers were suspected of influenza, isolated, and monitored during this time. In addition, 121 residents of Ho Chi Minh City reported to the Hospital for Tropical Diseases during this time and tested PCR-positive for the new pandemic influenza. The graph below shows the arrival and status of the first 619 suspected cases of pandemic influenza in Ho Chi Minh City. 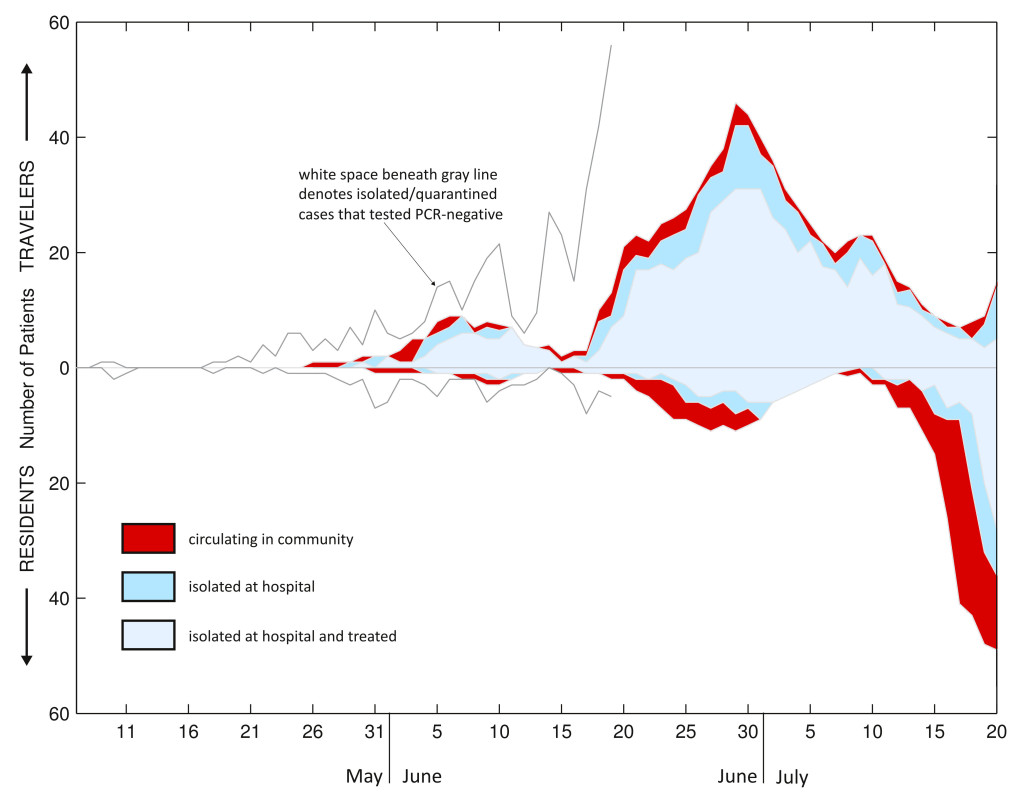 Note that the top half of the graph shows the infection, isolation, and treatment status of airline passengers (450 in all), while the bottom half shows the status of self-reported cases in residents of Ho Chi Minh City (total of 169). By mid-June, the inflow of patients was too high to keep detailed records on negative patients. In the second half of July, two outbreaks were reported in schools in Ho Chi Minh City, at which point it was clear that community transmission could not be contained.

During the final two months of observation — May 26 to July 24 — there were 3.3 infected and symptomatic passengers arriving at Ho Chi Minh City’s international airport every day. Depending on what type of assumptions one makes about symptoms duration and influenza’s incubation period, this means that there were between 0.5 and 0.9 pre-symptomatic and thus undetectable influenza-infected individuals coming into Ho Chi Minh City every day during this time.